Are You Really That Tough?

For some time now there has been intense competition in finding and eating hotter and hotter Chillies. Maybe it’s a test of status, maybe the test of a real man, or maybe even just a personal satisfaction of having tamed a beast of a fruit and it’s fire!

Whatever the reason for eating Chillies, there has always been a need for assessing the heat value that a Chilli actually has. This scale is called The Scoville Scale, after it’s inventor, and you will find a list ranging from Zero to Atomic. 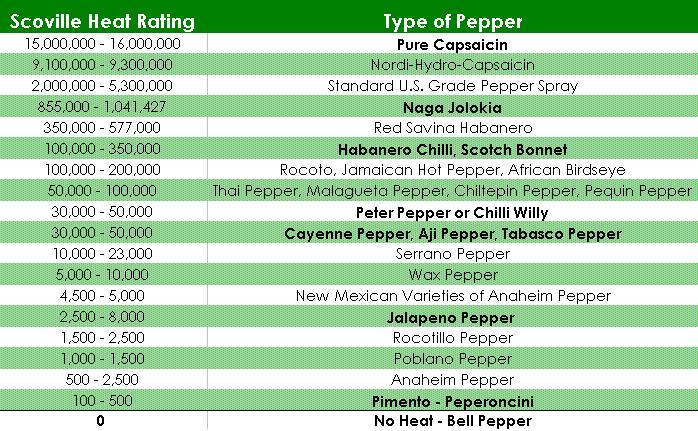 Measuring The Heat of Chillies

In 1912, The American Chemist Wilbur Scoville developed a method to rate the heat that is a Chilli Pepper is able to produce. This was possible because the chemical compound resposible for the heat felt in Chillies can be measured and used to give certain pungency values to a variety of different Chillies.

As you will know from tasting Chillies yourself, clearly there are some big differences in the heat felt by eating different types of Chilli, but the difference between the heats is often quite large and difficult to rate by taste buds alone.

A common misconception is that Chillies actually produce heat when they are eaten, causing the intense burning as part of a chemical reaction – However the actual way Chillies work is very different…

The fruits of the Capsicum genus of Chillies contain a chemical compound called Capsaicin, which stimulates nerve endings located in the skin called chemoreceptors. These receptors are particularly found in the mucous membranes, which explains why you get a running nose and temporary relief from a cold after a hot curry!

Interestingly Chillies also provide effective pain relief from colds and the flu – Click for more on the Health Benefits of Eating Chillies.

The Discoveries of Wilbur Scoville and His Scale

The units of measurement used in giving ratings to Chillies and their heat are called Scoville Heat Units (SHU), after the name of the inventor. Some Chilli Sauce Manufacturers use this rating as a selling point, or to give customers a better idea of what to expect.

The method Scoville developed involved preparing a solution of the Chilli extract, and diluting this extract with sugar water until the “heat” is no longer detectable by a panel of around 5 tasters.

The number of times needed to dilute the solution before the “heat” was no longer detectable formed the basis of the Scoville rating. For example, Bell Peppers or Sweet Peppers have a Scoville rating of Zero as they do not contain the chemical compound Capsaicin, which causes the burning effects.

On the other end of the scale, some of the hottest Chillies in the world, for example the Habanero Varieties, had to be diluted in solution over 200,000 times before the heat was no longer detectable!

The Scoville Organoleptic Test, as it is known, did have a few problems. The test itself relied on the panel of tasters, and of course each would have their own varying sensitivity to Chilli products, based on many unaccountable factors. Another problemm with this method was the time it would take to produce these individual dilutions, especially at the higher end of the Chilli Scales.

Today, the results of Chilli testing are recorded in ASTA Pungency Units, which is a measurement of a Chillie’s relative capacity to produce a sensation of heat.

This method of testing is faster and more accurate, but without the work of Scoville, a new testing like this might not have been around. Because of this, and the huge familiarity of Scovilles work in developing his infamous scale, the results produced from the new method of testing are converted to Scoville Heat Units.

The method of conversion from these ASTA Pungency Units is quite simple – A recorded measurement of Capsaicin content of a Chilli of 1 part per million (ppm) equates to 15 Scoville units, so a simple multiplication of 15 is all that is needed to make the conversion to Scoville’s Scale.

The units produced by this method of testing were consistently around 20-40% less than those produced by the Scoville dilution test.

However, usually this known error can be accounted for in the final figures, and consistent results using both scales can now be acheived.

The Problems With Chilli Heat Testing

Testing Chillies for their heat value does have its inaccuracies.

The problems faced does not really come from the method of testing but from the variation that can be found in nature between Chillies of the same variety.

Soil types, climate, and region can also play a role in this variation in heat, and the difference can often be quite large; sometimes by a factor of 10 or more.

However, this difference can be made smaller by sourcing Chillies that have been grown in their natural environment. The Scoville Scale also organises Chillies with a similar heat value in ranges to overcome this.

Why The Scoville Scale Works

As you can see from the heat ratings on the Scoville Scale Table, although the table itself is a heat leaderboard, it also has a estimated range of heat values between closely connected groups of chillies, so in effect, the table acts as a great reference when planning a meal or looking for something different.

In essence, this arrangement of values is very useful and provides some interesting insight into the world of Chillies and their heat.

And if you want to grow the naughtiest chillies around (also hot!), then view our Chilli Growing Kits.